At the conclusion of the spring soccer season, Capital FC hosted the 3v3 Live Soccer tournament for the first time. The tournament went so well that we are hosting it again – this time with a Halloween theme! Teams will not only compete on the field, but will also compete in costume contests and do trick-or-treating. 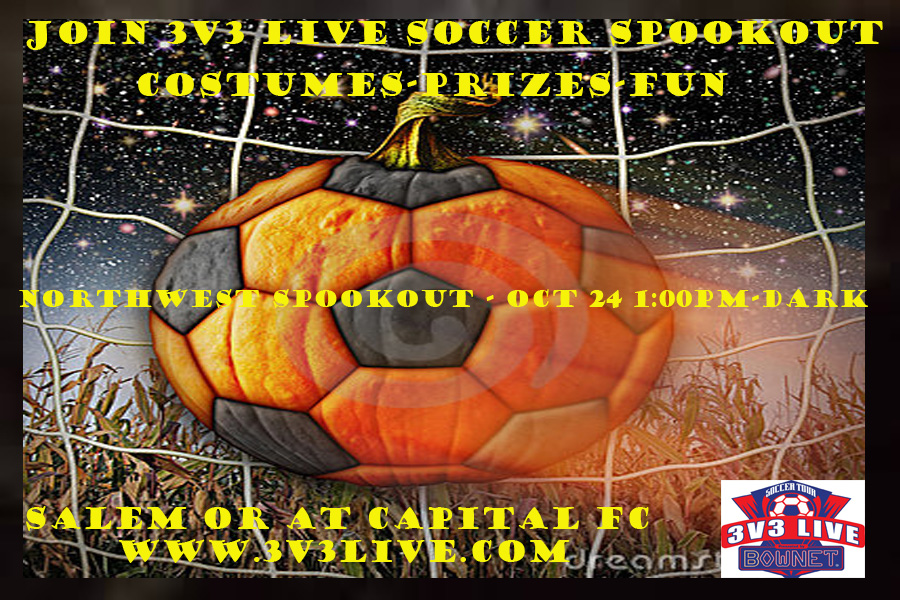 Capital FC interviewed Ryan Farwell (CFC Juniors Coach) to get a take on his experience with the first 3v3 back in June.

How was your experience with the 3v3 Live in June?

We had a great experience. The tournament was well run, it was at one venue, and we got the thrill of the tournament experience but only had to spend one day doing it. 3v3 is exciting it is fast paced and has lots of scoring. We got to play some people we had not played before. Hopefully as the tournament gains recognition more teams will participate in future.

How difficult was it to form a team?

It was easy. In fact we could have almost formed two teams if we would have had another coach. With 3v3 you only need 5 or 6 players and it is pretty easy to get kids (Parents) to commit when it is only on one day.

Are you planning on doing the “SPOOK OUT?” Any ideas for team costume?

We are going to try to get some teams entered into the “Spook Out”. We hope that more teams will sign-up it will be a lot of fun. We are going to keep our best costume ideas top secret. But, I would love to see a team dressed as Politicians, or maybe Smurfs, or possibly Lumberjacks, or they could dress like the Peanuts gang in honor of my favorite Halloween Special “It’s the Great Pumpkin, Charlie Brown”.
__________________________
The 3v3 Tournament is open to recreational and competitive teams. For more info or to register, click here.